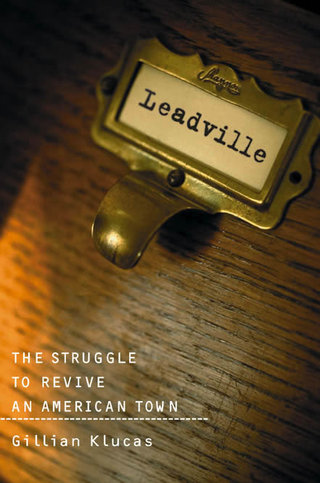 Leadville: The Struggle to Revive an American Town

When the residents of Leadville, Colorado, awoke one cold February morning in 1983, it was to the Arkansas River gushing blood red with toxic mine waste headed straight to a pump station supplying public water. The event sparked a Superfund cleanup that drew national attention at the same time the mining industry abandoned the people it had supported for more than a century. That volatile formula catapulted the town into a modern-day Western standoff with federal officials determined to clean up the hazardous mess the town had been built upon. It is the true story of this standoff that Klucas vividly recounts in Leadville: The Struggle to Revive an American Town.

"(Klucas) is a gifted storyteller and researcher whose telling of a controversy largely unnoticed by the outside world is riveting and will leave readers wondering which side to root for."
–Denver Post

"… excellent narrative … Klucas accomplishes the almost impossible task of making thickets of environmental science, politics and litigation come alive … With evenhanded sympathy for all parties … she presents a fascinating inside look at one of the most heated environmental issues of the day."
–Publishers Weekly

"Gillian Klucas has just written an astonishing book about Leadville. … This is an excellent book, both as an environmental case study, and as a dramatic reminder that the battle is not yet over."
–Metro Daily West (Framingham, MA)

"Klucas makes even the drab players as bright as the river … flashing with human interest and keen environmental insight: an illuminating march through environmental politics at a turning point in green awareness."
–Kirkus Reviews (starred review)

"Leadville is the most fascinating study on cross-cultural relations in the United States in quite some time."
–Urbana.org

"In an era of increasingly polarized thinking, Leadville is a fascinating morality tale, one which carries this message: Understanding that no contemporary problems are simple is the first step toward reaching workable solutions."
–Anniston Star (Alabama)

"Klucas tells the story of Leadville with compassion, color, energy and a knack for explaining legal and scientific aspects."
–High Country News